This is sort of like the WORLD Wide "Chess Game" that the Illuminati have right now in the works, they have ALL the Key pieces in place to make CHECKMATE!

And will WIN completely in May of 2015…in just 365 days the ENTIRE World will be theirs!…
GREAT Player those guys are.

That’s what you get of Centuries of Trying and PRACTICE!

So their New World Order is COMING to YOU soon....

Or over YOUR grave most certainly (Although most people won’t have one, it’s HARD to bury 6 BILLION plus bodies in a short period of time wouldn't YOU agree?...), if you are NOT super rich nor have an extremely bright mind. 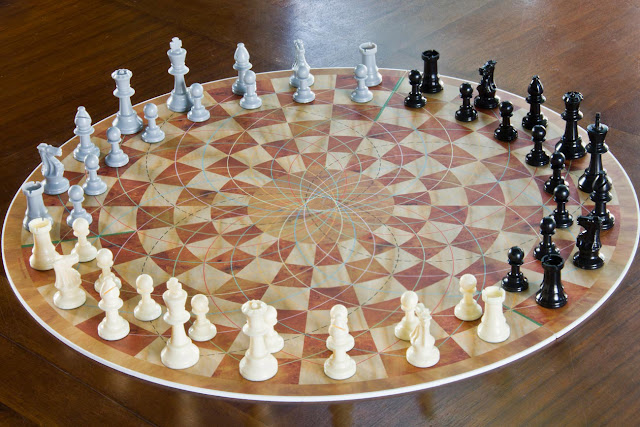 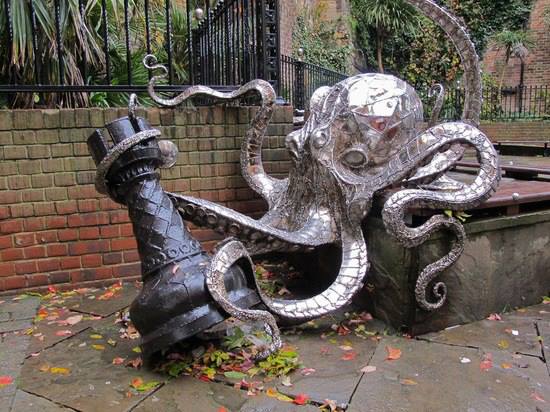 I am doing some research about the 3 Man Chess Game, to find out WHEN was "invented", I see some customers reviews at Amazon as old as October 2, 2012.

But the manufacturers site has one from as old as March of 1999!

In those days I had ALREADY made my decision to go live in Wisconsin!

Via Chicago of course...

Estrange, very much because it’s something like I proposed to the enemy in this post dated April 30 of 2013 and I was NOT aware of such game until yesterday that someone posted it in Goggle plus...

What I told them was that if 8 million of Jehovah's people survived Armageddon in July 10th of 2018, then the SAME people would be on satans side, plus the same number of "neutral" people between the 2 sides.

But it can be DOUBLE with children included...

This game shows exactly that in a way!

48 million people from Armageddon until the END, that I do NOT know the date by the way, only Jehovah and Jesus will decide that later according to the "heat of the game", but its 40 year of Great Tribulation so far...can be shortened though as Jesus clearly said it would be.

This only CONFIRMS my suspicions that satan already is AHEAD of the game KNOWING what Jehovah is going to set as RULES...

Like with me for example, satan knew BEFORE me who I was!

And also the puppets he uses, they would have killed me by now if they really wanted that for sure, but I am sure satan told them NO to do that by now...

Why because he KNOWS what Jehovah God and Jesus are going to give to me after I am converted to spiritual life...a SWORD of FIRE!

That is not pretty outlook for my enemies after that let me tell you...

Did you notice how many rows are before getting to the center of the game?

6 and six represents human IMPERFECTION…so whoever reaches the center which is number 7, will have the opportunity of getting PERFECTION during the 1000 years Reign of Jesus in the New World!
And maybe NOT have to die forever too!...

Regarding Chicago, I remember that the very first time I saw the Sears Tower in that Sunday morning of May 16th of 1999, I told my friend who have gone to pick me up to Midway Airport that that one was satans the devil tower!

And I had never seen it before in my life!

I knew it inside my heart already! And I did not know the zip code back then…60606 which is an easy “give away” in itself!

I arrived from Los Angeles via 1 stop in Las Vegas, and had traveled all night, I arrived like at 5 or 6 AM in Chicago.

Scary flight since at night you can barely see anything in the for the most part EMPTY Middle West States.
I only saw the scary lightnings in those thunder storms that dark night!....

And with what had happened in the Taesa Mexican Airline (now changed to another name, but SAME planes…) April flight to Mexicali from Guadalajara (and then later from there I went to Tijuana via a bus…), that I will NEVER forget…where the plane was going to go down for an engine malfunction in midair…if it wasn't because of Jehovah’s MERCY and LOVE for His people, I would not be writing this right now let me tell YOU!

Anyways I remember I crossed the Tijuana border, the most SURVEILLED one in the world at the time in April 20th of 1999, how can I ever forget that date when the Columbine Colorado school shootings happened?

That border was a “WALL” almost impenetrable at the time, and I made it the FIRST TIME trying, me alone out of 11 other poor people…

Some had MONTHS trying it…many had given up and returned to their places in Mexico or elsewhere in Central America they had come from… too SAD.

So do YOU think I had Jehovah’s Holly Spirit operating in me that day?

Of course, sometimes operates in me in wonderful ways!